History of the club

The club was first established in 1971 by Joan Wall. Joan was an ex England international player (1958-60) and played her hockey in Nottinghamshire at Sherwood Ladies. She had the foresight to introduce a new club into Notts to increase the local competition, also to take advantage of new playing surfaces available, realising that it would improve the skills of hockey players. Joan began with some players from Sherwood Ladies until the club attracted more local players. The club was formerly known as ‘Carlton Ladies’ as Carlton Forum was the base for home matches. In those days we played in green shirts with grey skirts.

It was in the late 1970s that the club moved to Redhill Leisure Centre to attract players from Arnold and pupils from the three surrounding secondary schools. The club then later changed the name to ‘Redhill Ladies Hockey Club’. The kit changed too by playing in burgundy and blue quarter shirts, burgundy and blue socks but keeping the grey skirts. Most of the matches were ‘friendlies’ organised by the fixtures secretary and by then the club had two teams. Joan had successfully built a club with a working committee and a forward-thinking ethos.

During the 1980s Don Nettleton from Nottingham Men H.C. was invited to coach the club and Joan remained available to help and advise as club Chair. This proved to be a good decision as Don was ambitious and the club developed a strong skill base amongst the players. Team play and tactics improved too, attracting many new talented players as the club became more successful.  Our Club players always had time to help and suport new and junior players and they were able to play regular matches in the second team, until they were strong enough for the first team. 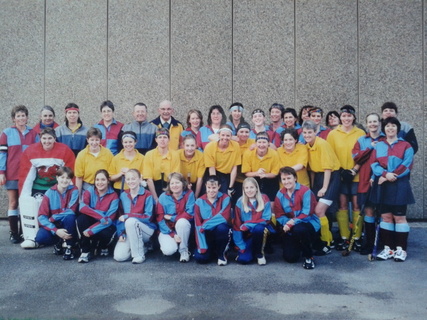 By the time the county leagues were established, Redhill had a first team to be reckoned with! In the late 1990s, playing on ‘astroturf’ at Redhill, the club played in one of the Midland Leagues narrowly missing promotion. At that time the first team played in the bright yellow shirts.

Our Club has always invested in Junior programs and players have time to help and support the juniors and new players. Our second team enables regular match play. There are many Nottinghamshire players who started at Redhill Ladies H.C. We remain a very welcoming club.

Don chose to retire, and the club has been coached by a variety of hockey coaches since, as we remain ambitious, with varying degrees of success.

Looking for a better quality of pitch, the club moved to the then newly laid Southglade pitch, until it was vandalised, and have now settled at Goosedale Sports ground. Don Nettleton would have been pleased! (He played for Nottingham Men there.)

Joan Wall is now 86 and her initiative to create a new club was successful. Her ethos, forward thinking and organisational prowess created a club that has stood the test of time - when many clubs have folded or merged. We are now at an exciting time in our club development as we look forward to the future! 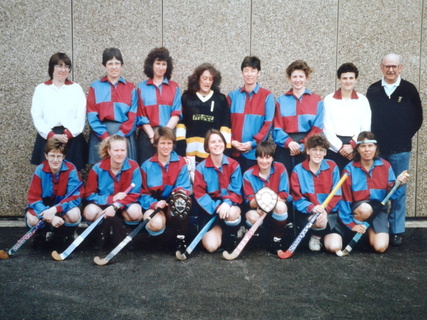 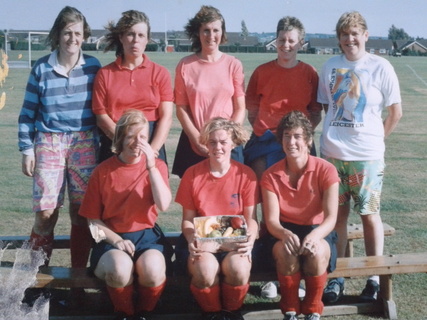 Contact us today if you are interested in finding out more about our club either as a player, official, coach or volunteer.

Details of Data Controller are

Name: Member GDPR Do not delete